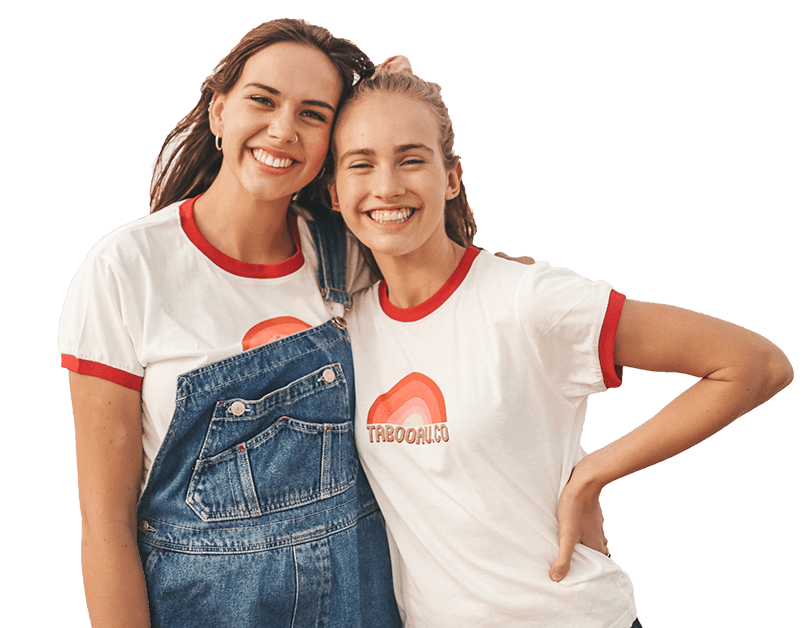 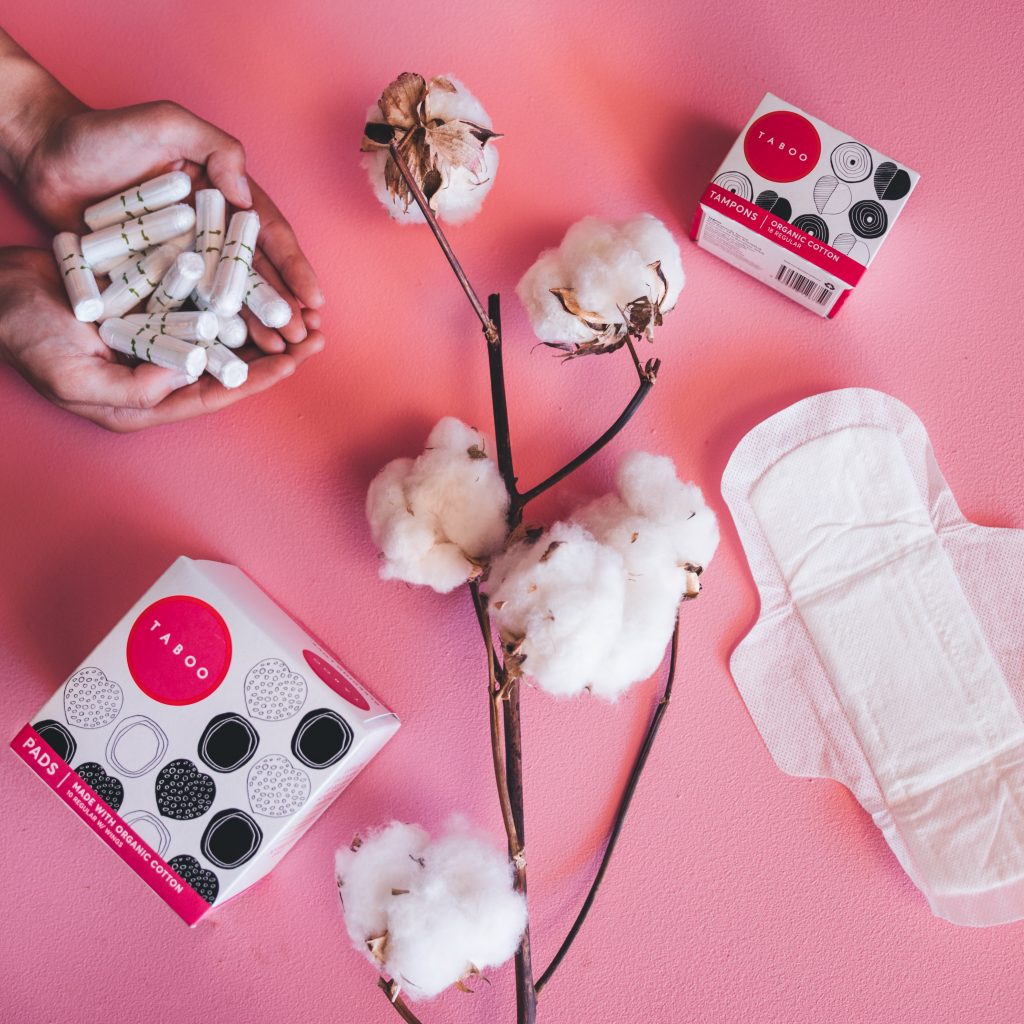 In their final year of high school, they learnt that around one in three girls in developing countries leave school when they start menstruating, often because they don’t have access to safe sanitary care. Eloise and Isobel also discovered that Australians spend $300 million on pads and tampons each year.

“After researching menstrual health around the globe, we couldn’t believe that so many women don’t have access to proper sanitary care and aren’t able to go to work or school while they’re on their period. Then the idea of selling a product that people will buy in their day-to-day lives, and using the profits to change the lives of these women, blew our minds,” Eloise says. “Knowing the stories and statistics, as well as a solution, we felt an overwhelming sense of responsibility, and courage, to start TABOO,” Isobel adds.

That vision soon became the only Australian brand established solely to improve sanitary health and education across the globe. Through selling their own organic cotton pads and tampons, TABOO commits 100% of net profits to One Girl; a Melbourne-based charity with a similar social purpose. One Girl run a number of holistic education programs in Sierra Leone and Uganda – countries which they describe as “two of the most challenging places on earth to be born a girl.”

In Sierra Leone, girls use strips of cloth known as ‘pieces’ to absorb their bleeding and rarely have a safe place to wash and change these makeshift materials. The shame and difficulty of menstruating in these conditions prevent many from going to school. In fact, a girl in Sierra Leone is more likely to get married before the age of 18 than she is to finish high school. The impact of this has a rippling effect. As any climate scientist will tell you, educating girls is one of the most powerful solutions to slowing population growth and ultimately reducing CO2 emissions. 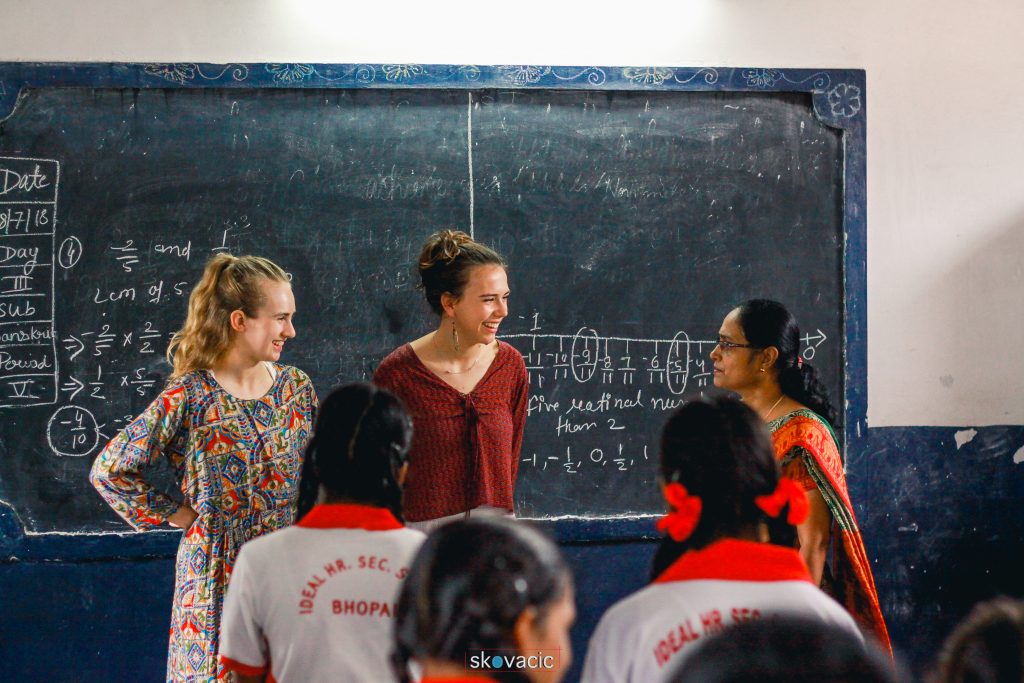 Isobel and Eloise speaking with a class

After travelling and researching in Sub-Saharan Africa and India in 2018, Isobel and Eloise came to know that providing affordable and safe sanitary care is only one half of the job. In Sierra Leone, and in many other developing countries, menstruation issues are blanketed under strong cultural stigma. Their inaccessibility means many girls and women don’t even know what a sanitary pad is. Those that do know often have various misconceptions about them, one being that they cause infertility.

“It’s important to provide access to proper sanitary care, but what’s the point if girls don’t know how to use these products? That’s why we’ve chosen to support One Girl, as they also facilitate culturally-appropriate menstrual health and education programs in Sierra Leone and Uganda. It’s crucial both girls and boys know how the menstrual cycle works, to understand things like sexual health, contraception and the normality of menstruation,” Eloise explains.

“There’s a taboo around menstruation all over the world, and the stigma is here in Australia too. People feel uncomfortable to talk about it and embarrassed to experience it. But periods are something that half of the world’s population go through, and they are not something to be ashamed of,” Isobel says.

TABOO also supports disadvantaged women much closer to home. Through their online store, customers can purchase sanitary products on behalf of women in need. Isobel and Eloise regularly drop off pads and tampons to a Vinnies Women’s Crisis Centre in Adelaide, as well as send donations to women living on Anangu Country, in collaboration with the Ngaanyatjarra Pitjantjatjara Yankunytjatjara Women’s Council.

Isobel and Eloise are often praised for their entrepreneurial activism, but they believe TABOO’s success is equally down to their small team of Adelaide-based volunteers, as well as the stockists and customers who support their mission. They describe TABOO as not just a social enterprise, but “a movement designed to unite women across the globe through their shared experiences of menstruation.”

When they’re not talking periods, whether it’s with an assembly of schoolboys or on national television, the girls are busy studying. Isobel’s doing medicine at Adelaide University and Eloise is in business and international studies at Flinders University. You can often find them in a groovy café or walking their dogs around Adelaide.

TABOO Sanitary Products can be purchased in National Pharmacies and On The Run stores across the state, as well as through their online shop.

Do you know someone who is a young rights champion? Nominate a mate by sending an email to CommissionerCYP@sa.gov.au!