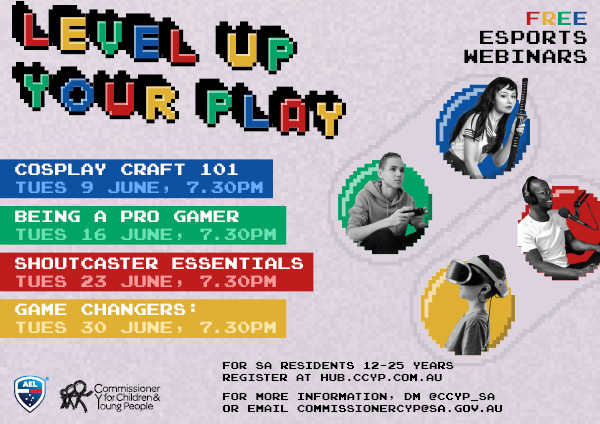 Level Up Your Play

hub is collaborating with local game developers and industry to bring resources and opportunities to keen gamers in SA.

During June 2020 the Commissioner for Children and Young People presented 4 live Level Up Your Play Esports Webinars in partnership with Australian Esports League.

Check out the full series of free webinars here:

Join Punzie and Whereisdanielle as they show you how you can get crafting a costume of your favourite super hero, game or anime character. They’ll be covering working with materials, planning your time and understanding the tools you’ll need. They’ll show you how you can begin with simple costumes and work your way up to the more complex, all from your own bedroom.

BEING A PRO GAMER

Join swip3r as he talks you through what it takes to be a competitive gamer. Where to get your start, how to improve your skills, and what an effective training regime looks like. You’ll learn how you can make a career out of gaming with hints and insights that will help you get your start. Before long you’ll be on your way to becoming the best gamer in your neighbourhood!

Join Avrl as he takes you through the basics of gaming commentary production; from what kind of equipment you might need to the software that will enable you to reach a wide audience. Gaming commentary is fast becoming a promising career. Many passionate gamers who know how to work a microphone and cover the rapid action of game play to entertain engaged audiences are finding themselves drawn to the Shoutcaster role.

Join Junglist, formerly of ABC’s Good Game, as he takes you on a journey through the most influential games from the turn of the millennium. These are the games that have re-shaped our lives and the world! They include party games that bring the whole family together such as Guitar Hero and Just Dance, as well as games like Minecraft which have brought gaming to education. They also include new tools like VR and motion tracking, both of which have real world implications. Plus much more!